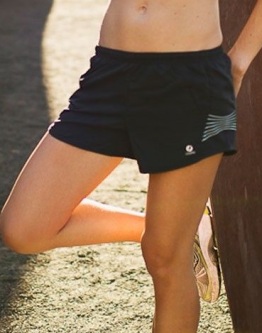 Just over three years ago, in the sweltering heat of my first Toronto summer, I decided to take up running. I had been a runner in my high school days, but I quit completely in college. Coming back to the sport after so many years, I felt like I was starting all over again. I had none of the confidence of my former skinny sixteen-year-old self, who used to tear through hilly cross-country courses with athleticism and guts. I didn’t feel like an athlete anymore. I didn’t even own a pair of shorts.

This proved to be a bit of an obstacle in the sweaty summer of 2012, in a city that, it seemed to me, was designed to trap every bit of heat in the concrete below my feet. But thirty-plus temperatures and crippling humidity be damned – there was no way I would be caught running, in public, in shorts.

The best I could muster was a pair of black knee-length tights. To me they looked “athletic enough” without betraying the pasty-white, shamefully toneless legs hiding underneath. I spent two months of a blistering heat wave, suffering through labored three-to-five-k runs in those tights.

My roommate – a natural athlete who ran on a track and field scholarship through college, while I was eating pizza and doing keg stands – sized me up on my way out the door one afternoon.

“You’re running in that?!” she asked. “It’s like forty degrees outside!”

I knew I was being ridiculous, of course. When I look back at pictures of myself that summer, with that benefit of outside perspective that only comes with time, I can say confidently that my body looked just fine. I had no reason to be terrified of something as innocuous as wearing shorts. But I was.

I remember very vividly they day the heat finally broke me. Even hours after the sun went down, it was scorching hot outside. Something had to give; either the heat had to go, or my body image issues did.

I’ll never know for sure, but I’ll bet you my first run in shorts was a PB. I was so embarrassed, so uncomfortable, so irrationally convinced that strangers on the street were gawking at my totally normal, human-looking legs, that I all but sprinted my usual 4K loop.

I didn’t get comfortable with them overnight, and I’d be lying if I told you I wasn’t relieved when the fall came and I could switch back to running in yoga pants without risking heatstroke. But over time, I’ve made peace with the way that my legs look in shorts.

Over many years, and countless miles, running has made me realize that my legs don’t exist to be measured and judged by the standards of others; my legs are machines, that can carry me places and do things that others simply cannot do.

But I’d much rather crack three hours in the marathon.